It’s a big band, making a huge noise. It is important to name all the people involved in this sonic uproar. Laurent and Mathieu. Full stop. Plus a drum kit, a guitar and an amp. And sometimes, in the home-studio, the rowdy and obnoxious goat called Miguel. This is enough to produce the volcanic, explosive blues-rock that is The Inspector Cluzo music. No synths, no computers, no bass-guitar even. They are doing everything by themselves, management, label and are organic professional farmers. Their home-run label is called F**kthebassplayer. The guitar, anyway, makes enough racket: it sometimes feel like it has eaten the bass and the bass player with it. Why would there be a goat on a rock’n’roll record? Because this is the same rural, brutal music, the same kind of electrocuted blues that is played by guys in faded overalls and rubber boots in the countryside of Gascony (France) or in the shacks of the Appalaches (USofA). Very often, blues musicians sing or talk about centuries old traditions that made them who they are. They tell the stories of their land, their soil. You will not find better guides to tell the amazing destiny of their own people, the Gascons, than The Inspector Cluzo. They know the chaotic history, the rich language, the stubbornness, and humour of their people. This is a different kind of blues. But as much as they love the traditions, they also want to act in the future. When they aren’t touring the world, they run an organic family farm, Lou Casse -that means "The Oak" in Gascon language-pioneering Agro-Ecology. They know their land, their soil. They touch it every day. Twenty five acres of land, hundreds of Gascon geese, sheeps, pig, permaculture garden, organic free-seeds corn and wheat fields. A bullying goat keep them very busy six months a year. But in the old and haunted loft of Lou Casse, a drum kit, a guitar and its’ amp are constantly ready. Just in case they feel the urge to indulge in pandemonium. Neighbours never complain. They live miles away in this deep countryside not so far from Mont-de-Marsan, home to the first ever international punk festival in 1976.

Gascons are renowned to be travellers. The Inspector Cluzo, over the past 12 years, have played more than 1 000 concerts, in no less than 65 countries. This includes huge spots at Eurockéennes in France, Fuji Rock in Japan, Download in the UK or Lollapalooza in Chile and Brazil. Different audiences, different cultures but one thing doesn’t change from one gig to the next. They literally grab the audience. It’s pointless to resist the joy, excitement and mayhem. This is blues-rock at its most urgent, at its most flamboyant. Just ask Clutch band members or singer Eels, just ask kids in the mosh pit, just ask the journalists or Vance Powell (Chris Stapleton, The Raconters, Jack White) the multi-Grammys awards winner, their friend and mentor. They will tell you, in awe, the tale of these two Gascons who reinvented electricity. 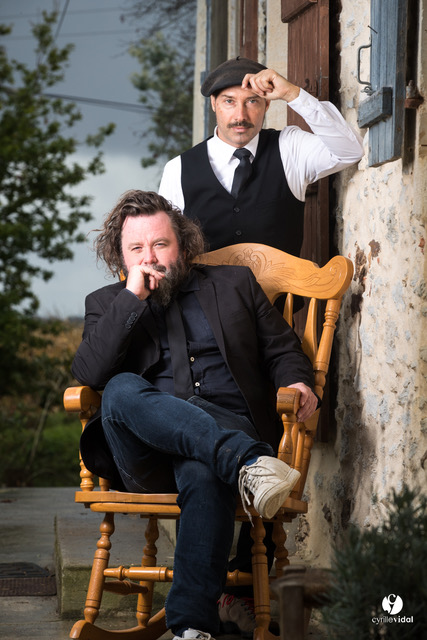