“It was a case of throwing ideas at each other in their rawest form and stuff would emerge,” says Lou Rhodes, Lamb’s singer and lyricist, “There’s a Buddhist saying about the creative process being like throwing rocks at each other. It was like that, like process driven art.”

“We had no idea what we were doing,” laughs Andy Barlow, her partner in the band, sitting on a sofa in his clifftop studio, near Brighton, “I was 18 and not even aspiring to work with a singer, that wasn’t on my agenda. I very much just wanted to do interesting soundscapes. There was no idea of ‘Let’s include a song’. I really liked to make music that would fit no bracket, that would take 90 years just to describe.”

From such chaotic beginnings blossomed one of the great albums of the 1990s, Lamb’s eponymous debut. Listened to 20 years later, it sounds remarkably contemporary; soulful, alternative electronic pop, laced with drum & bass, twitchy funk, and melancholic downtempo grooves, yet never, ever settling into easiness. It’s an album that keeps the listener on their toes, from its opening trio of tech-step-laced numbers, ‘Lusty’, ‘God Bless’, and ‘Cotton Wool’, through to the acidic pulse of ‘Trans Fatty Acid’, the haunting strings of ‘Zero’, the brassy jazz of ‘Merge’, the explosive, epic ‘Gorecki’, and the closing heart-worn slowie, ‘Feela’.

Released in autumn 1996, the album received near-universal praise and launched Lamb, who went on to achieve international acclaim during a four album career that lasted until 2004, when the pair parted ways. They regrouped in 2009, a happier unit, having spent time exploring solo projects, and have since released two more albums. They both say their debut and their last album, 2014’s ‘Backspace Unwind’, are their favourites of their back catalogue.

“And on that last one,” Lou clarifies, “We were definitely harking back, stylistically, to the simple approach of the first record.”

Like many great albums, ‘Lamb’ comes with a story, a narrative that only adds to its appeal. The two people who made it were opposites, one as strong-willed as the other. The truth is that the band didn’t evolve out of an ongoing friendship. In fact, they didn’t even really know each other.

By the mid-Nineties, Lou was a reasonably successful photographer in her mid-twenties, a face on the scene in her native Manchester. Her family had a folk-singing heritage and she nurtured musical aspirations. Friends of hers cut a tune at So What!, a local studio set up by Simply Red’s management that made its living from DJs aspiring to the big league. They told her the producer was good but “too weird” for them. They said she might like him. The producer in question was 18 year old Andy Barlow.

Andy was an electronic music aficionado who’d been buying synths and equipment since the age of 12. He was poached by So What! five months into a sound engineering degree at Salford University. They’d heard a tune of his that Skint had released under the moniker Hip Optimist (he was signed the same day as Fatboy Slim). After a year working for So What!, he was sacked for not being musically conventional enough. As he was packing his stuff the studio phone rang. It was Lou Rhodes asking what he was up to. Not much, he’d just been fired. They arranged to meet at the Dry Bar the next day. Lamb was born.

Lou had a basement photographic studio which they turned into a “roughly cobbled together” music studio, borrowing a sampler from the band Sub Sub and a four track from New Order, alongside Andy’s own equipment. The first song they created was ‘God Bless’. They knew they were onto something. The next tune turned out “a bit ploddy”. The pair were listening a lot of Fila Brazilia, as well as early drum & bass on pirate radio. Lou played Andy A Guy Called Gerald’s ‘Black Secret Technology’ album. She suggested he try some percussive production along those lines. He did. The resulting tweaks turned the track into “Cotton Wool’.

One day in 1995, down in London, Richard O’Donovan, A&R at Fontana, heard Andy’s Hip Optimist record, then the music journalist Amanda James mentioned there was a new act in Manchester he should check out which Barlow was involved with. O’Donovan took this as a sign and arranged to take Lou and Andy to dinner in Manchester.

The pair picked an expensive restaurant to milk those major label bucks. Only problem was, O’Donovan didn’t appear. For four hours. Eventually, when they were slightly pickled by booze, the waiter brought over the phone on a long cord (these were pre-mobile days). It was O’Donovan making excuses. Andy was incandescent. Why had they been kept waiting four hours? He told O’Donovan to “Fuck off!”

“I thought we were too cool for Universal, anyway’,” he recalls, “That we needed to be on Warp or Mo’ Wax or some indie.”

The next day, when they were in the studio, there was a knock at the door. It was O’Donovan.

“If a band ever tells me to fuck off, I always come and see them the next day,” he said. They haggled out a deal. With one more track completed, he’d offer them a recording contract. It was a unique deal in that instead of buying studio time the label gave them money to put together their own studio, a first in Universal’s history. The album’s production, however, was far from plain sailing. Lou and Andy fought tooth and nail for their individual musical viewpoints.

“It was very challenging in studio,” remembers Andy, “Every bar was an arm wrestle, but that’s kind of what made it. “’Gorecki’ was the trickiest song of all to write because originally it had a different chorus and I didn’t like it, and Lou said, ‘Well, I don’t like your beats,’ and we went into this huge row, an argument so tense I thought it might be the end of us. We agreed to put it down and leave it, then it came to six weeks of mixing at Ridge Farm Studios in Surrey, where the Stones and Led Zeppelin once recorded. We agreed that if I changed the beat, she’d change the chorus. I did this all-nighter session. It was like when you’re driving and come to, realising you’re nearly at your destination but can’t recall the previous few hours. I suddenly came to as the sun was coming up and I hit play. ‘Gorecki’ came out of the speakers and I couldn’t place any of it – what had I been doing for the last 10 hours!?”

The song became totemic for the band, their best-know tune, but ‘Lamb’ is full of cuts that are its match. Lou’s lyrics come from a place that’s raw-hearted and open, relatable, especially on tracks such as ‘Cotton Wool’, ‘Closer’ and ‘Feela’.

“It was very much relationship stuff,” she says, “In a way, those lyrics are about disappointment. I was very much an all-or-nothing person when it came to relationships, throwing my heart out there. Björk and I are both Scorpios and she once said that in relationships she’d show up with 99 Sainsbury’s carrier bags full of love and plonk them in somebody’s house. They’d say, ‘You can’t put all that in here!’ That really rang true for me in those days. I’d throw it all at someone then not understand why they were completely freaked out and wanted to run a mile.”

In just four months, the album was complete. Upon its release, it quickly became very special to a lot of people. It was, for its fans, the sort of album that defined an era. At the time, after Universal promised to buy them a duplicate studio to take on tour, Lamb went on the road for 18 months, all over the world, promoting ‘Lamb’. 20 years later, they’re keen to revitalize the album, to relive it.

“In terms of the live shows it’s a real adventure,” says Lou. “On the one hand we’ll be reinterpreting but, on the other, we really want to bring it back to how we originally did these tunes. I have albums like that, which you listen to again and you’re right back there at the point in your life where that album landed.”

Tunes such as ‘Trans Fatty Acid’, have mutated over the years at their live shows into proper psychedelic dance work-outs (indeed, the band released a new version in 2014, acknowledging the fact), but others have never been played in concert at all.

“We’ve never done ‘Zero’ live,” says Lou, “And we’ve never done ‘Feela’ either. When we recorded ‘Zero’ the strings were done by the Chainsaw Sisters who just turned up with this improvised piece that was very tricky, unique. We’ve done ‘Gold’, on and off, over the years. It’s really nice to go back and listen to the album version. It has a raw warmth and brings back memories for me of recording it; Graham Massey of 808 State playing this vibraphone with a motor that was too noisy, so I had to sit under the vibraphone and turn this wheel so it made less noise.”

“I walked in the room, wondered what you were doing, and walked out quickly,” says Andy. They both laugh uproariously. Their spikiness with each other, that caused them to sometimes storm out of interviews back in the 1990s, is long gone.

“That’s why we split in 2004,” Lou explains, “We were pulling so strongly in different directions, driving each other up the wall, so we needed time apart. We grew as human beings, did stuff we wanted to do, then we came back together more as friends. Before that we’d become these frustrated siblings forced together by the blood of our music. Now we actually like hanging out again and there’s more new music to come after this tour.”

In the meantime, Lamb fans have a treat to look forward to. The debut album will be performed in its entirety on a series of dates, with the live band including the trumpet-player and double-bassist who were on the original record. It’s going to be quite something.

“We’ve done six albums and I’m proud of them all,” says Andy, “But there’s something very special about the first one in our hearts. It’s one worth making an anniversary out of.”

Hey everyone, the gear is out and the excitement is rising, looking forward to the @ChalkVenue show, see you there… https://t.co/GlapxIAX5x 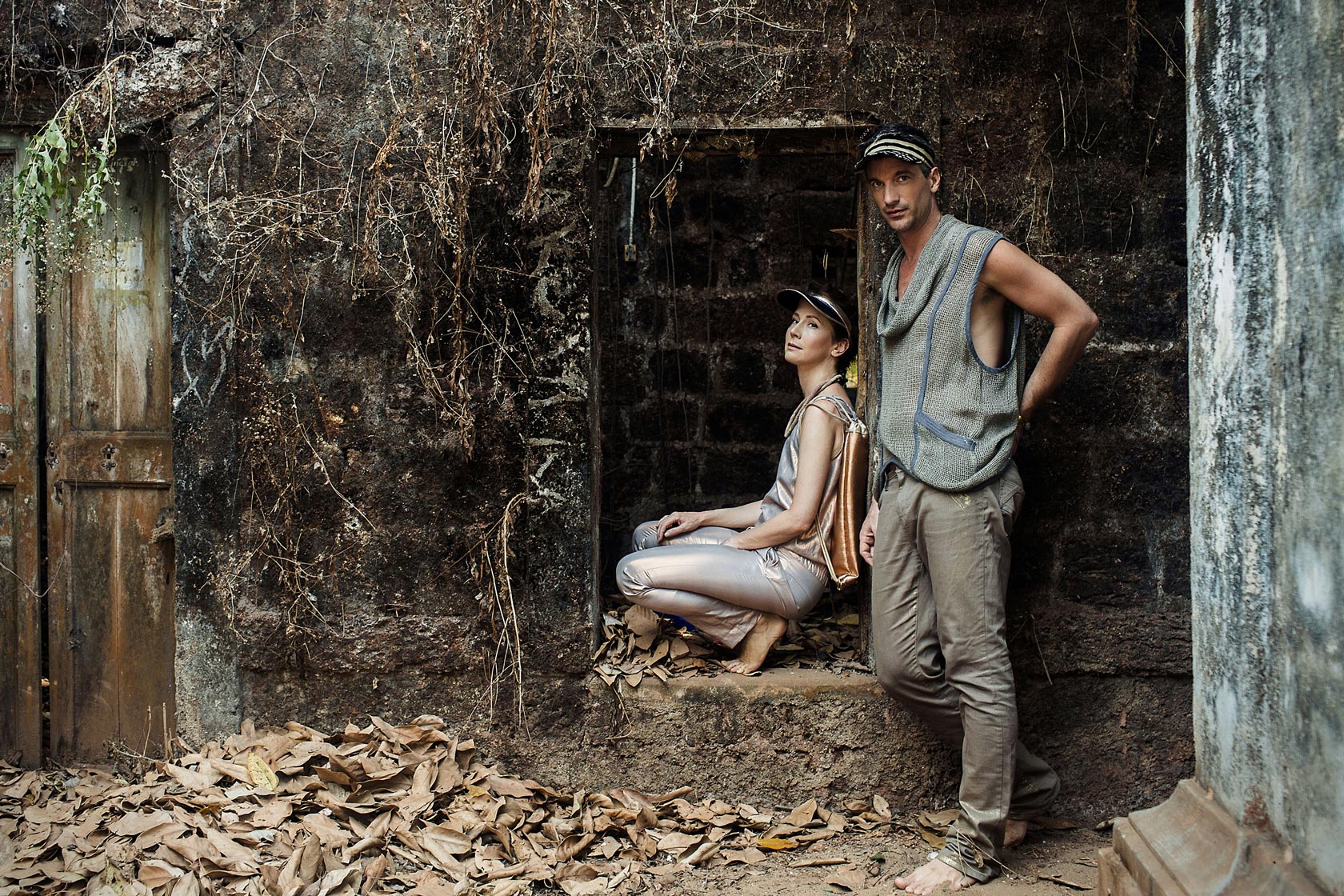