‘The Weight Of Your Love’, Editors fourth studio album and the first to feature new members Justin Lockey and Elliott Williams is, according to lead singer and songwriter Tom Smith, ‘a band record, a musical record, a rock record with a foot in that alt-rock / americana world’. Inspired by Scott Litt’s work with REM amongst others and built around a live performance approach to recording, the album contains the most strident and direct Editors songs to date. With a lyrical fascination with love in all its myriad forms, ‘whether romantic or break-up or creepy or even stalkey love’ (Tom again) and recorded in Nashville at Blackbird Studio by producer Jacquire King (Tom Waits, etc), ‘The Weight Of Your Love’ represents a new chapter for the band in more than one way.

Cast your mind back to the close of 2010. Editors had just finished another round of touring and promotion in support of their third album, 2009’s ‘In This Light And On This Evening’. Six years on from their multi-platinum debut ‘The Back Room’, the band had seen many of their contemporaries disappear from view whilst steadily building themselves into one of Europe’s biggest bands. That third album debuted at Number One in the UK charts as had its predecessor, ‘An End Has A Start’ and spawned a continent wide hit in the form of ‘Papillon’, a thunderous electro rock tune destined to force arms into the air at festivals across the continent and the first non-domestic single to debut at Number One in the Belgian singles charts where the band are arguably the biggest name in the rock world.

Never a band to stop, the four reconvened in London to begin work with producer Flood on the songs that Tom Smith had been developing during that campaign for the next album. And then, slowly but inextricably, the wheels came off. The first week in the studio was spent fixing broken equipment, three rehearsal sessions came and went with declining results and Editors found themselves sliding from the peak of achievement into a trough of doubt:

‘It dawns on you slowly, sickeningly, that it’s not good enough. For the three of us, for me and Russ and Ed it didn’t feel like the songs were in the right place and they weren’t what we wanted to do’ TOM SMITH

Editors had been together for over a decade, first as friends at college, then Snowfield and then as Editors. The bonds between the quartet transcended the success of the band and encompassed parents and friends intermingled over that decade, their early days camping on their manager’s floors and working in call centres to keep the band solvent through to international success and two members relocating to New York. It wasn’t easy but, ultimately, as Ed Lay says ‘we were still mates but our life in the band was based on our music’. Simply put, the realisation dawned that Tom, Russ and Ed wanted to take the band in a direction that Chris didn’t want to take, and that if the next step wasn’t taken there would be no more Editors records. Chris Urbanowicz, founding member and iconic guitarist was asked to leave the band.

As if losing a founder member, Tom likens it to ‘losing a limb’, wasn’t enough, Editors were booked to headline Belgium’s Werchter Festival three months from that moment, their biggest ever show to 85,000 people. You can possibly read the beginning of the ‘new’ Editors in what happened next.

‘My gut was to cancel it’ Tom states directly, conversely Ed went the other way; ‘It was a little bit of a leap of faith but I was confident we could make it work’. Which left Russ with the casting vote and he went with Ed. Werchter was on and the challenge from here was how it would happen. But whatever happened now, Editors would continue. For now, filling a field with sound was top priority.

Enter Justin Lockey. Former guitarist with Your Code Name Is:Milo, film maker, Krautrock enthusiast and described by Flood, who suggested him to the band, as ‘a positive personality’. One email later and he was coming to London for his first rehearsal, an experience that he found somewhat odd to say the least.

‘It was the weirdest thing I have ever done. I’ve never played anyone else’s song in full, I never had that culture of covering songs. But, it was quite liberating. I was more concerned about the fans than the band, people waiting for you to fuck it up’.

To make things even weirder, that first rehearsal was minus Tom, absent with tonsillitis but, for Ed, that may have had its benefits, the three choosing to have a go at a new song alongside the old favourites. ‘It was a weird situation but we clicked. We worked on ‘Sugar’ that first day and Justin immediately impressed me with his ideas’.

All three were conscious of the pressure on Justin and use the phrase ‘replacement Chris’ to jokingly refer to the situation he may have found himself in. Enter Elliott Williams, member of Airship and known to Tom, Ed and Russ through their shared management. Alongside taking the pressure off Justin, adding a second multi-instrumentalist made sense as Tom explains; ‘it was big shows and big stages and it felt right to have a more traditional rock set up, a more musical environment that didn’t rely on tapes and synths’. Now Editors were five and, following an intensive period of rehearsal, ready for Werchter.

No discussion of where Editors are now can underestimate the importance of that performance on June 30th 2012. All five regard it as a pivotal point for this album, Tom can only shake his head and say it was ‘something else’ whilst Justin says ‘I came offstage at Werchter and wanted to do more shows straight away’. In many ways, ‘The Weight Of Your Love’ was born alongside a new Editors that night. The big rock record was on, the band were set.

This new Editors were fizzing with ideas, the new members were not differentiated from the old, suggestions and parts came from all members from the off. Progress from here was swift and the new band found new ways to work, as Russ explains in relation to the new guys; ‘we looked for their suggestions, there was nothing guarded about it’, whilst Justin found the immediacy of the band bonding thrilling; ‘they pushed me to play in a way that I hadn’t done before, I learnt a lot from them and I think they really enjoyed the feeling of what it’s like to be in a band.’ This bonding increased with the choice of Jacquire King as producer and was cemented when he suggested recording at Blackbird Studios in Nashville, meaning the new Editors were destined to spend six weeks sharing a house and a daily studio commute in the early months of 2013. Those journeys were soundtracked by US rock radio, what Tom describes as ‘a lot of AC/DC and Van Halen but also The Stones and Beatles’, classic bands who made classic records totally in keeping with the vibe that was gradually playing out in the studio as ‘The Weight Of Your Love’ came together in an astonishingly short time.

The experiences of Nashville go beyond a radio soundtrack in terms of influence on the record. Russ believes that ‘the space really helped with everything. As soon as you get there you realise it’s a driving city and that feeling of space really seeped into the album’ ‘, for Ed, the communality of Editors existence changed his role in the band radically:

‘Everybody felt freer to speak their mind about parts. I didn’t feel that comfortable previously but recording this album I felt a fully-fledged contributing member of the band.’

The spirit of freeness and abandon flowed from the first take to the final wrap. Across the album are a series of ‘news’ for Editors. Tom’s falsetto on ‘What Is This Thing Called Love’ is his first, reclaiming a song he wrote following a challenge from his former A & R man to make a song for an X Factor contestant. He can’t help but smile as he explains how he came to keep it, ‘my A &R got fired, the X Factor singer got dropped and we decided to keep it. I think it’s one of the best things we’ve done’. Horns make an appearance on an Editors record for the first time, Elliott’s ‘amazing´ (the other four) singing voice gave Tom a melodic counterpoint, best displayed on ‘Formaldehyde’ whilst ‘The Phone Book’ suited just an acoustic guitar so that’s what it got. As Tom notes ‘I have a deep love of those big rock records that are straightforward and we really embraced that throughout’.

Even the problems were becoming positives. ‘Nothing’, a track that the band had debuted at their Birmingham fanclub shows pre Werchter had been earmarked as a potential single but recording it was proving tricky to say the least. ‘It sounded like a bad fight in an Irish Bar’, Russ deadpans of the waltz time track. A suggestion to tap up Clint Mansell, the Grammy award winning ‘Black Swan’ soundtrack man and, co-incidentally, native Brummie, was embraced with open arms in this sense of new possibilities and his reworking of the track into a stately centrepiece for the album once again reinforces the changes that have been wrought by this band in their approach to their music in the last year. As Ed notes, previously such a thing would have ‘been done reluctantly, we’d have been uncomfortable with it’ whereas now, for the band and in Russ’s words ‘the more I listen to it the more I get out of it, it’s a brave move and this record has been all about that’.

Which pretty much sums it up. A brave move, more a succession of brave moves, the kind of moves that bands increasingly find hard to make in modern times. Editors have become five but, more than that, they have rediscovered being a band. All the members continually refer to ‘The Weight Of Your Love’ as the product of a band, as a band record. For Tom Smith ‘it feels like we’re more sure of ourselves, more muscular. The record feels untouchable at times, I’m really quite surprised at what we’ve achieved.’. In the spirit of the new Editors, the democracy of old and new let’s leave the final word on the album to the new boys though: to Justin and Elliot, who uniquely can look within and without for the time being:

‘We have definitely bonded into a band, maybe more than we expected. Recording the album there were no egos around, all we wanted to do was help Tom deliver those songs.’

‘I don’t think I’ve ever been in a band that is this excited about what they have done. You start thinking, what will come from this, the progression that is possible. They lost a member who was integral to their signature sound and they’ve come back twice as big. I can’t wait to get out and play it live. We want to take the face off everyone who is watching.’ 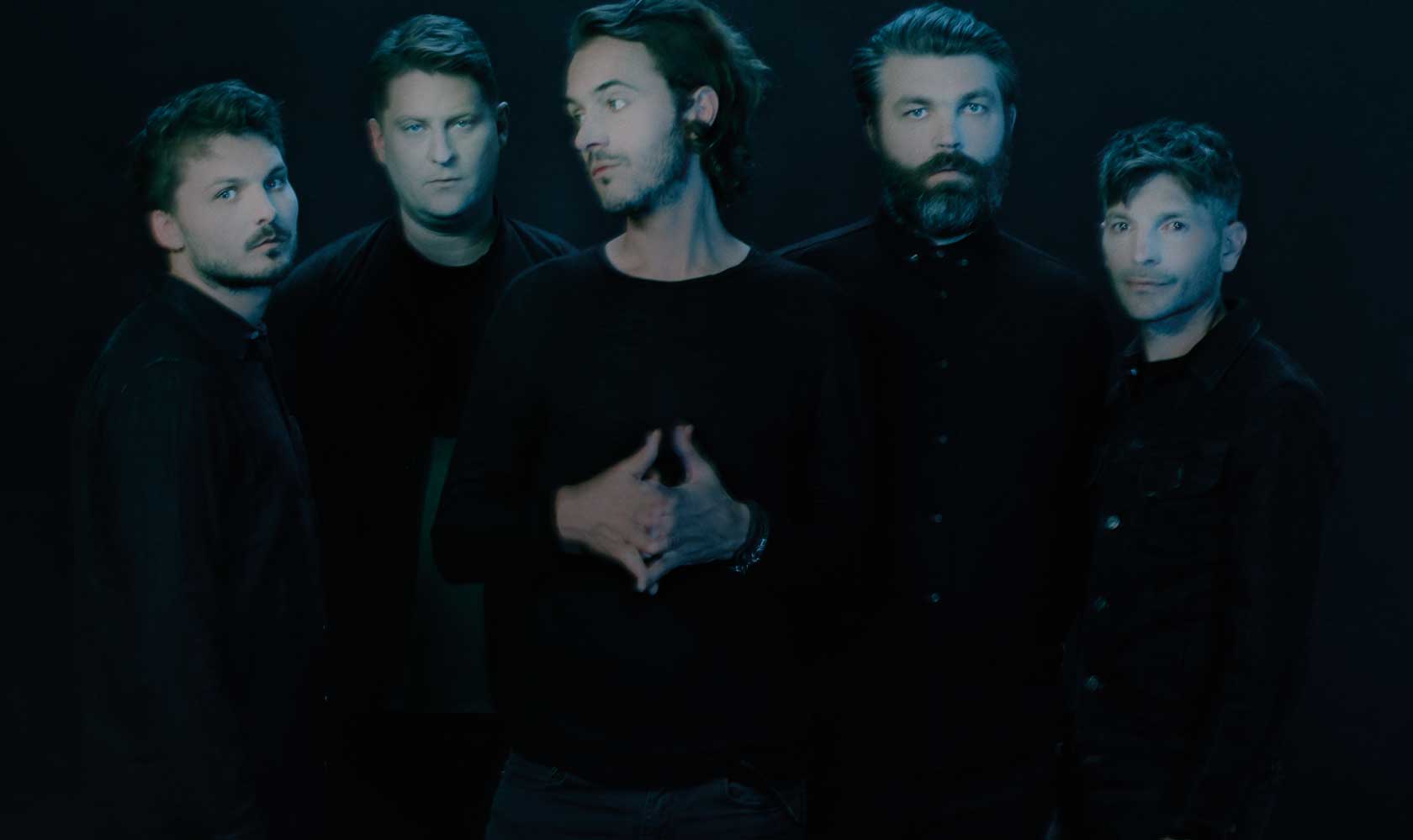