It was over 30 years ago that Dave Mustaine founded Megadeth, in the process pioneering the sound that would become known the world over as thrash metal. And from the very beginning, the band proved to be the most lethal and audacious unit on the heavy music scene, pushing thrash to the limits of musical ferocity and instrumental virtuosity on early efforts like their 1985 debut, Killing Is My Business…And Business Is Good! and 1986’s seminal Peace Sells…But Who’s Buying?.

In the decades since, Megadeth have taken their place as one of metal’s most influential and respected acts—not to mention among its most successful: Over the course of their career, the band have sold 38 million albums, notched six consecutive platinum efforts—including 1992’s two-million-selling Countdown to Extinction—and garnered 11 Grammy nominations. And onstage they continue to be a world-dominating metal force, shaking stadiums from the U.S. to Bulgaria as a key component of the recent milestone Big 4 concerts, as well as playing their own shows to massive crowds in every corner of the globe.

Now, in 2016, Megadeth have reinvented themselves once again. The legendary metal outfit, led by visionary singer, guitarist and songwriter Mustaine, has announced the release of their 15th studio effort, Dystopia. The album, which sees Mustaine once again joined by stalwart bassist David “Junior” Ellefson, is the first Megadeth effort to feature new guitarist Kiko Louriero and drummer Chris Adler, the latter on loan from Lamb of God. Together, they inject new levels of musical venom and instrumental dexterity into what was already a wickedly potent brew.

The result is an offering that shows Megadeth at a new peak of their powers. “We wrote a really heavy, riffy record,” Mustaine says proudly. “And there’s an excitement right now that I haven’t felt in a really long time.” That excitement is at the core of each of Dystopia’s 11 tracks. The album bristles with a renewed energy and intensity, from the pile driving, “Motorhead-y” thrust of “The Emperor,” to the epic stateliness of “Poisonous Shadows”—which finds Loureiro adding both acoustic guitar and classical piano flourishes to the mix—to the labyrinthine riffing and pummeling rhythms of “Death From Within,” a song that, Mustaine says, “just continues to build and climax. There are riffs in there that come at you once and then you never hear them again.”

In a similar vein is the intricately structured “Bullet to the Brain,” which, Mustaine says, “has a few different twists to it, rhythmically. It starts in one gear and then downshifts to another, and it’s not what you would expect. Most songwriters stay in this same-y sounding thing from beginning to end, but I wanted to do something that followed a weird kind of pathway. I think those unexpected surprises are a really important facet of this band, and one that we haven’t really been doing lately. It was nice to try that again.”

In fact, much of Dystopia sees Mustaine musically pushing forward while also looking back. “We’re turning toward our roots, but with a fresh new feel,” he says. To that end, leadoff track “The Threat is Real” begins, Mustaine points out, “innocently enough, with some little finger cymbals and interesting Middle Eastern percussion,” before exploding in a bout of fierce riffing. “When the song takes off, it’s just like a ‘Rattlehead’ or ‘Loved to Deth’ kind of thing,” he explains, referencing two classic cuts from Killing Is My Business. First single “Fatal Illusion,” meanwhile, “is really similar in feel to ‘Bad Omen’ and ‘Black Friday,’ that kind of stuff,” he says. “It totally reminds me of the Peace Sells era, with a lot of guitar soloing going on and the double-kick drums just pounding away.”

Those guitar solos and pounding drums, of course, are of particular interest this time around. For one thing, the lead guitar slot in Megadeth has always been a highly coveted, if also intensely scrutinized position, and one that Mustaine has through the years filled with some of metal’s top players. In the fleet-fingered and highly versatile Loureiro, a 20-year veteran of Brazilian progressive metal act Angra, he may have found his ideal foil—a player who is equal parts stunningly virtuosic technician and aggressive, from-the-gut shredder.

As for how Loureiro came to Mustaine’s attention, the frontman recalls, “When we first started our search, I received a list of guitar players from several friends, including Chris Adler. I looked into every one of those guys, and they all were fabulous. And compared to a lot of them Kiko was relatively unknown, even though he’s famous in Brazil and Japan. But he had the most points in the end. He’s a young and exciting guitarist, and just very, very thick with talent. And he has an exotic style that dovetails really nicely with my own playing. I mean, listen to something like ‘Conquer or Die!’ on the new album—the first solo he did on that one really snapped my head around.”

More than just a skilled player, Loureiro also proved to be a surprising creative force in the studio. “He was offering a lot of suggestions while we were recording, which is something I haven’t had come from stage left in a long time,” Mustaine says. “Like, ‘Hey, let’s maybe change this bass part…’ ” He laughs. “I mean, the guy’s here for one album and he’s already written four songs with me! So he had a big influence on the sound we were getting.”

As did the other new addition to the band, drummer Chris Adler, who, according to Mustaine, “brought some passion back to the music.” This was partly a consequence of the fact that, in addition to being one of modern metal’s top drummers, the Lamb of God skinsman is also, like most metal musicians who came of age in the Eighties and Nineties, a rabid Megadeth fan. “What’s interesting about Chris is that he’s really into Gar,” Mustaine says, referencing late Megadeth drummer Gar Samuelson, who played on Killing Is My Business and Peace Sells. “And in the studio Chris’ knowledge of and love for that time period kept reminding me of the magic we had in the beginning of the band with Gar, who was a jazz-type drummer. Back then, we weren’t trying to sound like anyone else—we were just trying to sound like Megadeth. And if you study Chris’ drumming on this record, you can really tell it has some of that jazzy, Gar flair to it. He made me fall in love with that sound again.”

But as much as Megadeth is known for their inimitable sound, they are also equally recognized for Mustaine’s distinct, incisive vocal style and characteristically penetrating lyrics—both of which are on abundant display on Dystopia. Lyrically, “The Threat is Real” is one of several songs in which the singer unleashes his pointed social and political attacks with lethal precision, railing against a “culture made of cover-ups” where “no one cares anymore.” It’s a sentiment that continues on the title track, where Mustaine sings about how “useless thoughts of peace are met with rage.” Meanwhile, on “Lying in State,” he warns, “there’s one playing by the rules anymore,” and asks, “How will history portray us?”

Elsewhere on Dystopia Mustaine tackles more personal topics, from obsession (“Poisonous Shadows”) to relationships gone wrong (“Bullet to the Brain”) to betrayal (“The Emperor”). He caps the whole thing off with a furious run through Fear’s rampaging hardcore punk classic, “Foreign Policy.” Why that particular song? Mustaine lets out one of his characteristic snickers: “Why not?”

The whole thing is wrapped up in stunning album art conceived by Mustaine and brought to life by artist Brent Elliott White. Merging the past with the present, the cover image places longtime Megadeth mascot Vic Rattlehead within the dystopian world depicted in Mustaine’s lyrics. “I told [White], ‘I want something that looks like Planet of the Apes or 12 Monkeys—where everything’s just all fucked up,’ ” Mustaine says with a laugh.

The end result is an album that, from the music to the words to the artwork, stands as one of the most cohesive, hard-hitting and dynamic entries in Megadeth’s storied catalog. Indeed, more than three decades after the release of Killing Is My Business, and following through benchmark metal masterpieces like Peace Sells, 1990’s Rust in Peace and 2009’s Endgame, the thrash legends, with Mustaine firmly at the helm, are showing no signs of slowing down.

For Megadeth, the future starts now. Prepare for Dystopia. 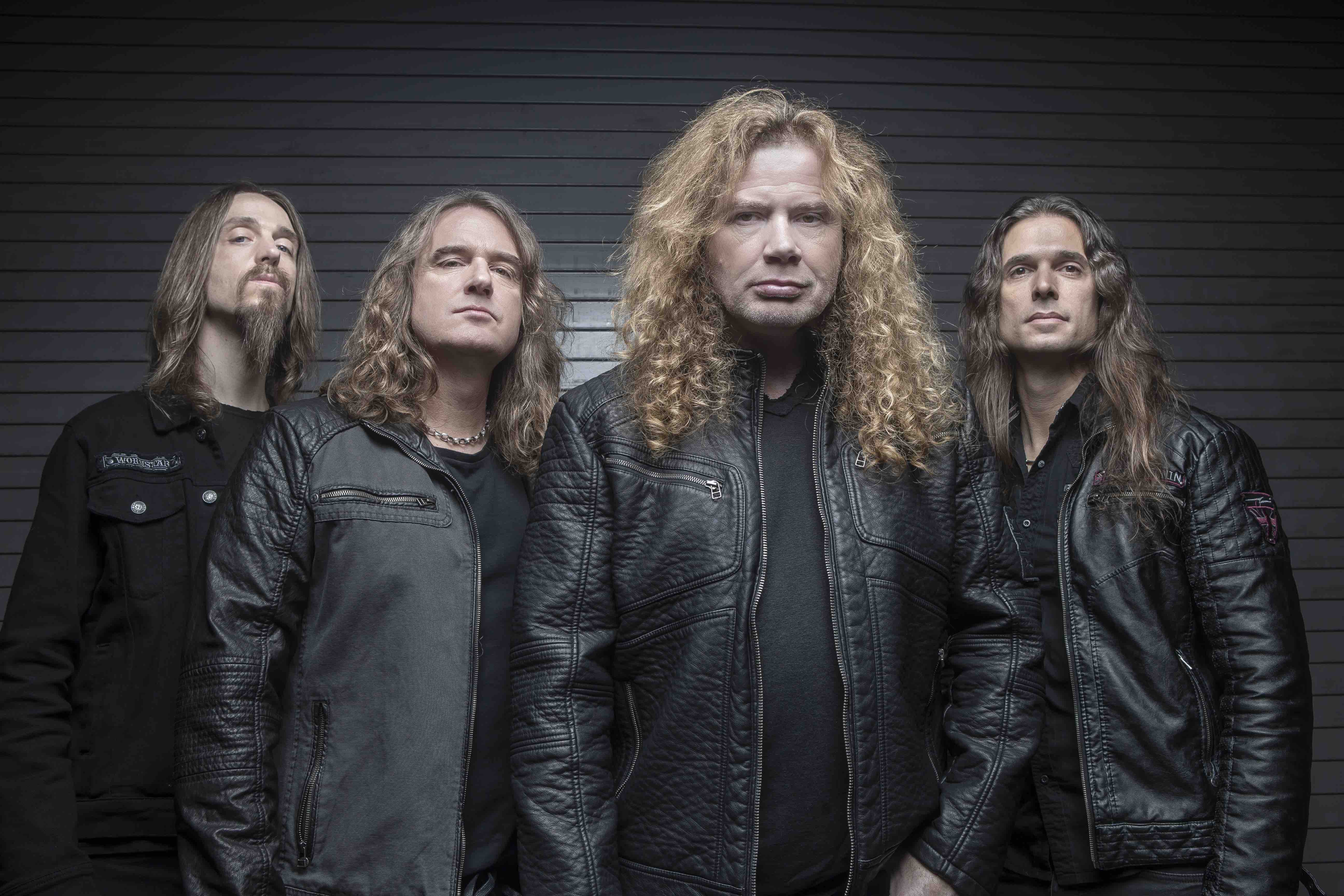