The clock’s ticking. Brutal times. Imponderable global politics. A profit-crazed sleaze in the White House. Tech saturation, info overload, iPhones up the wazoo. Too much crap music crowding out the killer stuff. Where’s the action? Who even cares anymore?

Little Barrie, a classic British power trio in the lineage of Cream and the Jimi Hendrix Experience, may not have all the answers, but they’re asking all the right questions.

Made up of Barrie Cadogan (guitar/vocals), Lewis Wharton (bass) and Virgil Howe (drums), their fifth album, ‘Death Express’, packs a heavy punch, channelling the three members’ ferocious musical chops into a raw, DIY response to today’s atmosphere of confusion and division. There’s no political message, just lyrical food for thought, and some of the tautest, most incendiary grooves you’ll ever hear, enticing even dancefloor-shy listeners to hip-shake away their cares. High-octane meditations on surveillance paranoia (‘Copter’), devious policing at mass protests (‘Molotov Cop’) and greed (‘Vulture Swarm’) have rarely felt so irresistible to body movement.

For Little Barrie themselves, global events of the last 12 months were a surreal backdrop to their own bold progress as a band. After 15-plus years of underground excellence together, this pathologically questing triumvirate were seeking to up their game, ready for Album No. 5. “In downtime at our rehearsal room, we’d be looking at the news – everybody’s gone nuts!” says Lewis. It was at Boogie Back 2, their practice space in Hornsey, that the sound of ‘Death Express’ was born – and recorded, as they ended up spurning big, expensive studios, in favour of a couple of ancient MacBooks, and an old tape machine.

The album’s genesis kick started, when Little Barrie were invited to provide incidental music for ‘Better Call Saul’, a spin-off series from hip TV phenomenon ‘Breaking Bad’, for which they’d already cut the theme tune. With no time to book a studio, they were forced to do it themselves, in their practice room. The response was favourable, and they began to feel that such DIY takes had a vibrant quality often lacking from ‘proper’ productions.

Says group leader Barrie, “Such amazing records have been made when people are breaking the rules – weird, stripped-down, self-made records like ‘Oar’ by Skip Spence, and ‘There’s A Riot Going On’ by Sly & The Family Stone. There’s a bedroom aspect to it, and a street aspect, too, which felt right for what we wanted to say this time”.

Three of their previous four albums were made at Edwyn Collins’s West Heath facility in London. Last year, however, Edwyn upped sticks for rural Scotland, a happy development in his ongoing rehabilitation from serious illness, which left Little Barrie at a crossroads.

Back in their rehearsal bunker, they demoed their first two new tracks, including ‘I5CA’, a song documenting an insane tour of America’s West Coast, which saw them pounding up and down Interstate Five between shows. It came out vibey and spontaneous, like a ’60s garage nugget repurposed for a hip hop block party. Instead of then slavishly re-recording the tracks in a hi-tech studio, they sent them on to an Edinburgh-based dance producer called Tom Forrest: he zipped up the mix, in Barrie’s words, “bringing a better spread and width of sound.” In layman’s terms: in your face; live and dangerous.

Self-releasing the two tracks on a 7-inch 45 before Christmas ’16, they got an ecstatic response, and it was a no-brainer to make the rest of ‘Death Express’ the same way.

With Virgil’s propulsive breakbeats pushed to the max (his CV includes a rap-rock band called Lunatic, and a secure grounding in drum ‘n’ bass), these tracks leap from the speakers as Little Barrie have never done before, expressing an urgency rare in a band approaching the end of their second decade together. But then, this is no everyday band…

Little Barrie started off as a solo guise for guitar whizzkid Barrie Cadogan, using the nickname given to him aged 14 by a mate’s dad in Nottingham. He grew up in that city surrounded by all kinds of cool music, from ’80s alternative stuff and psychedelia/acid-rock, through to R&B and jazz, and even DC hardcore and electronica. He came to London in 2000 “with Can and The Meters in my head, but I wanted a bit more Chuck Berry thrown in”.

He’d already started gigging as Little Barrie, when he met Lewis at mod clothes store Merc on Carnaby Street, where the band’s future bassist was running a record department. Barrie persuaded him to stock copies of his first single, and it went from there. With Lewis on board, they cut two albums, 2005’s blue-eyed soul/funk blueprint, ‘We Are Little Barrie’, and ’07’s ‘Stand Your Ground’ (produced by trip hop supremo Dan The Automator, and UK reggae-revive hero, Mike Pelanconi).

Only thereafter would the enduring line-up solidify, with the arrival of Virgil, son of Yes guitar hero, Steve Howe. Two further albums diversified into ’60s surf-pop (2010’s ‘King Of The Waves’) and darker soundtrack-y Krautrock (‘14’s ‘Shadow’), but along the way Barrie had developed a parallel career as a guitar-slinger for hire, sessioneering widely for premier-leaguers like Morrissey and Spiritualized, and serving time in Primal Scream circa 2006-15.

“All that has definitely been a good thing,” he says. “You can explore different sides of your playing, and it often brings out sides you didn’t even know you had. It’s a lot to ask of a creative person to try and channel it all through one project.”

With Lewis also working as an illustrator – having had exhibitions in Japan and Spain - and Virgil juggling other drumming and DJ-ing outlets, all three members have busy lives, but they see that as a positive. “Unlike a lot of bands, we don’t have the luxury of getting together as often as we’d like,” summarizes Virgil, “so when we do, we really relish it and enjoy it.” Adds Lewis, “It’s also harder to keep a band going this long if it’s your only focus. You come back to it, probably thinking, ‘Oh God, we’ve been doing the same shit for three years, here we go again’. Whereas for us, it’s just a total pleasure, and we’re raring to go.”

Yet, these irrepressible vibesmen have managed to remain underground, one step ahead of short-lived trends, with all their joy in music-making intact. Anyone interviewing them can expect a colourful conversation, taking in heroes from right across the pop-cultural spectrum, and how that culture’s bonding social purpose is the antidote to our political/industrial fears.

And so ‘Death Express’ arrives as a colossal outpouring. “We thought about cutting it down,” says Barrie, “trying to be neat and concise, but then we love Beastie Boys albums like ‘Check Your Head’ – these long listening experiences. So we thought, ‘No, fuck it, it’s going out as it is!’

On paper, the album’s title looks dark. The title track arose, says Barrie, “when I was flicking through my phone to find someone’s number, and I realised there’s quite a few people in there who aren’t here anymore. What with the state of the world, it feels like, as much as you can, you have to be around the people that are important to you. It’s been inspirational knowing Edwyn, seeing how he’s pushed really hard, and got his life back more than the experts expected.”

“Looking at things that way,” he concludes, “the title’s positive. Time’s short. None of us know how long we’ve got.” So, yes: the clock’s ticking. Seize the day. Time to jump aboard.

RT @PeterStefanovi2: I know it’s exhausting, I know it’s Sunday & I know the sun is shining but we must keep going with sledgehammer determ… 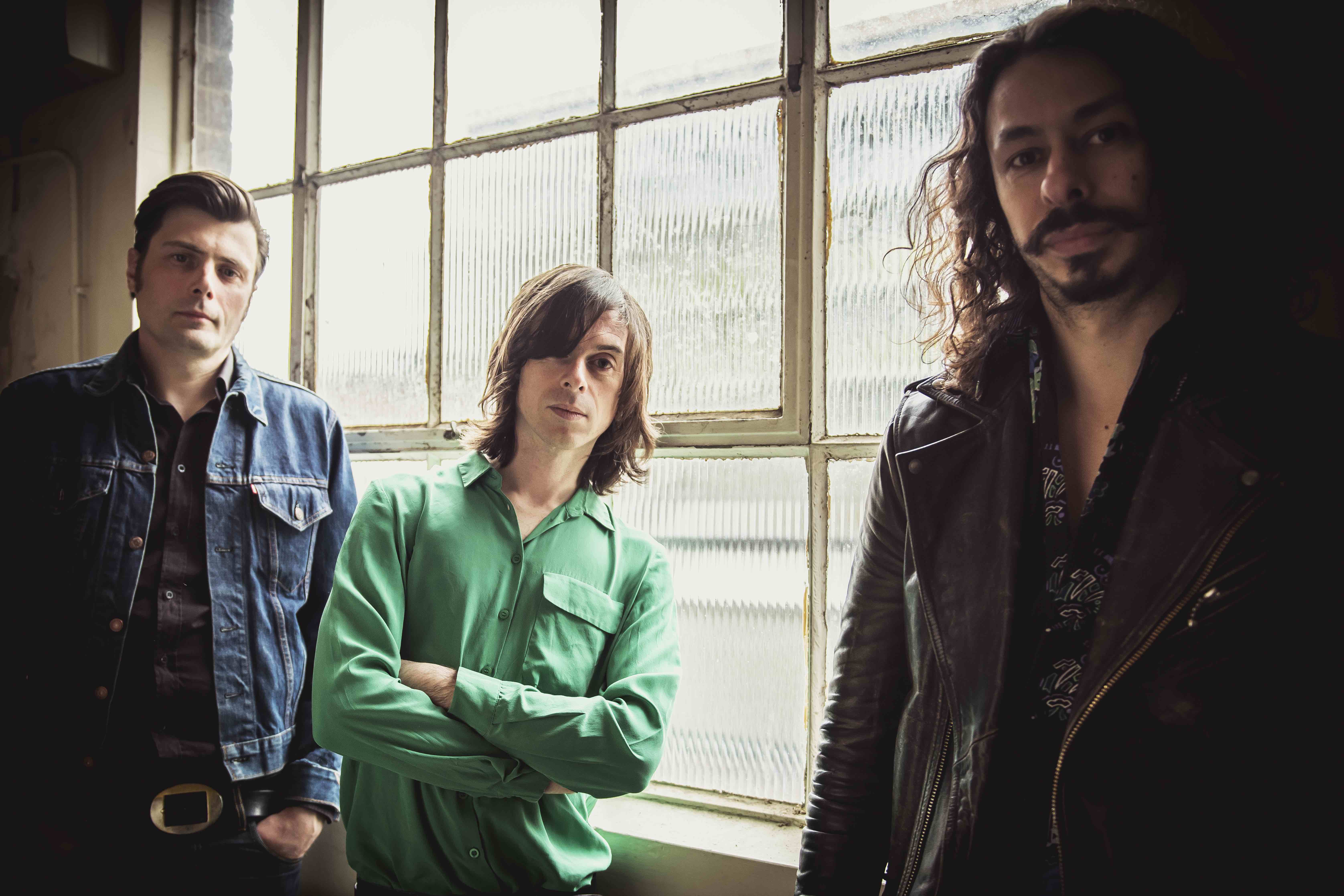