Colors mean various things to different individuals and organizations. They might designate mood, or they may signify affiliation when flown proudly for all to see.

In the case of PINS, swaths of the primary color wheel embedded in the group’s aesthetic, artwork, and presentation ring out almost as loudly as the pops of neon synths, loud guitars, and cheeky melodies in their music do. Not only does the palette distinguish the trio—Faith Vern, Lois MacDonald, and Kyoko Swan—from the rain-soaked soul of their native Manchester, UK, but it also unites them as a ​“girl gang​.”

Such vibrancy defines their third full-length album for their own Haus of Pins label, ​Hot Slick​.

“Since we’re girls who play music, our band has always had this ​‘girl gang’​ thing that follows us around,” exclaims Faith. “We do what we want though. It’s simple. We’ve learned how to present ourselves. Bold colors represent being strong. So, we’ve embraced those in the music, art, and aesthetic. Strength should be the main thing that comes to mind when you think of us.”

Since the release of ​Girls Like Us​ in 2013, PINS have exuded strength in their danceable alternative post-punk transmissions and earned the trust, endorsement, and creative blessings of rock royalty such as Iggy Pop and peers including Jamie Hince of The Kills. 2015’s ​Wild Nights​, which was recorded and produced at Rancho De La Luna with Dave Catching (Eagles of Death Metal), attracted acclaim from Harpers Bazaar​, ​Interview Magazine​, ​The Guardian​, and ​Stereogum​. They toured on both sides of the pond alongside everyone from Sleater-Kinney and Warpaint to Best Coast and The Subways. 2017 saw them unveil ​The Bad Thing​ EP preceded by the single “Aggrophobe” [feat. Iggy Pop]. ​i-D Magazine described it as ​“AMAZING​.​” ​Along the way, things slowly, but surely changed. PINS parted ways with the original rhythm section of bassist Anna Donigan and drummer Sophie Galpin. Paired down to a three-piece, Kyoko jumped from keys to bass. At the same time, they hunkered down and wrote and recorded ​Hot Slick​. Not to mention, Faith was pregnant throughout the entire process, even playing shows ​“up until eight months​.​”

“PINS has obviously changed, which is why there was a huge gap between releases,” the frontwoman goes on. “We got this room in Manchester where the three of us would rehearse, play, and hangout. We went back to square one and thought about how to portray everything going forward. It was an opportunity to refresh the image and sound. We built it up from scratch. As I was about to become a mom, I was also thinking about the world my daughter would live in. It was like a second chance.”

“After Anna and Sophia left, we looked at other sonic options,” Lois says. “We used more drum machines and synth production techniques to get the sound we wanted. As we were learning how to use these processes and equipment, our writing improved. It was different, because we were swapping out instruments, synths, and drum machines among the three of us. We weren’t assigned to the set roles of ​‘guitarist’ ​or ​‘keyboardist’​. If somebody had an idea, she just played it! That allowed us to be quite free. We got on the same page and really supported one another. It gave us energy and confidence in what we were doing as well as a fresh start.”

Kyoko remarks, “With less voices in the room, there was less pressure. The three of us were able to relax and be more natural.”

They expanded the soundscape, nodding to influences such as Soulwax, LCD Soundsystem, Suicide, and New Order. Additionally, they welcomed a rotating cast of collaborators. Rich Woodcraft oversaw the entire project as producer and engineer, while Jamie Hince and Dean Horner contributed additional

production and Nathan Saoudi of Fat White Family lent his talents on the keys. Faith personally handled all of the styling, photography, and creative direction for the artwork and rollout, emphasizing strident colors. The group also equally amplified every aspect of their signature sound, including the lyrics.

“Let’s be clear,” she grins. “A lot of the lyrics are a bit cocky and cheeky. It feels good to be unafraid though.”

Produced by Hince, the first single “Hot Slick” introduces the album with a glitchy drum march, wobbling synthesizers, and an ominous bass line. Cathartic howls crash into thick distortion as Faith repeats, ​“Get away, get away, I’ve got to get away”​ with robotic precision.

“It’s about escape,” she continues. “The whole thing is one big fantasy for us. It’s not real life. It’s about being a band, touring, and feeling alive.”

“The title ​‘Hot Slick’​ sounded sexy too,” laughs Kyoko. “It was something we came up with as a joke, but we all loved it.”

“Ghosting” sways back and forth between thudding bounce and heavenly harmonies punctuated by high register crooning. Primed to evoke fits on the dancefloor, it captures what Lois describes as ​“a big club vibe​.​” S​ peaking of dancing, the industrial bass groans and tambourine tingles of “Bad Habit” accompany a fan favorite dance move. “It always feels like I’m singing ​‘Bad Habit’​ right to the audience,” explains Faith. “It’s our most inclusive song.”

Meanwhile, a high-heeled skittering beat struts right through “Ponytail” towards a declaration, ​“Yes, I will be up all night, I whip my ponytail from side-to-side.” T​ he track centers around, ​“going out and having a good time with your friends without letting the party end.​ ​”

With its cheerleader-style chant and slippery synths, “Bad Girls Forever” doubles as a clarion call hung up on a sing-song-hook. “There are still some girls who are frightened at shows and don’t come out,” she adds. “They’re not confident enough to be on stage. It’s our job to make them feel like they should be. The song’s just for the girls.”

In the end, PINS fly their own flag higher than ever on ​Hot Slick​ and inspire in the process.

“It’s been over eight years, and so much has happened,” concludes Kyoko. “It’s about having a good

“PINS is a projection of ourselves,” Faith leaves off. “There’s a little bit of fantasy. This is the world we built for ourselves. Maybe people will dance there with us.”

RT @acrmcr: We are playing with a very strong lineup this Sunday at @WhitworthArt. We're on just before the firework display which will be… 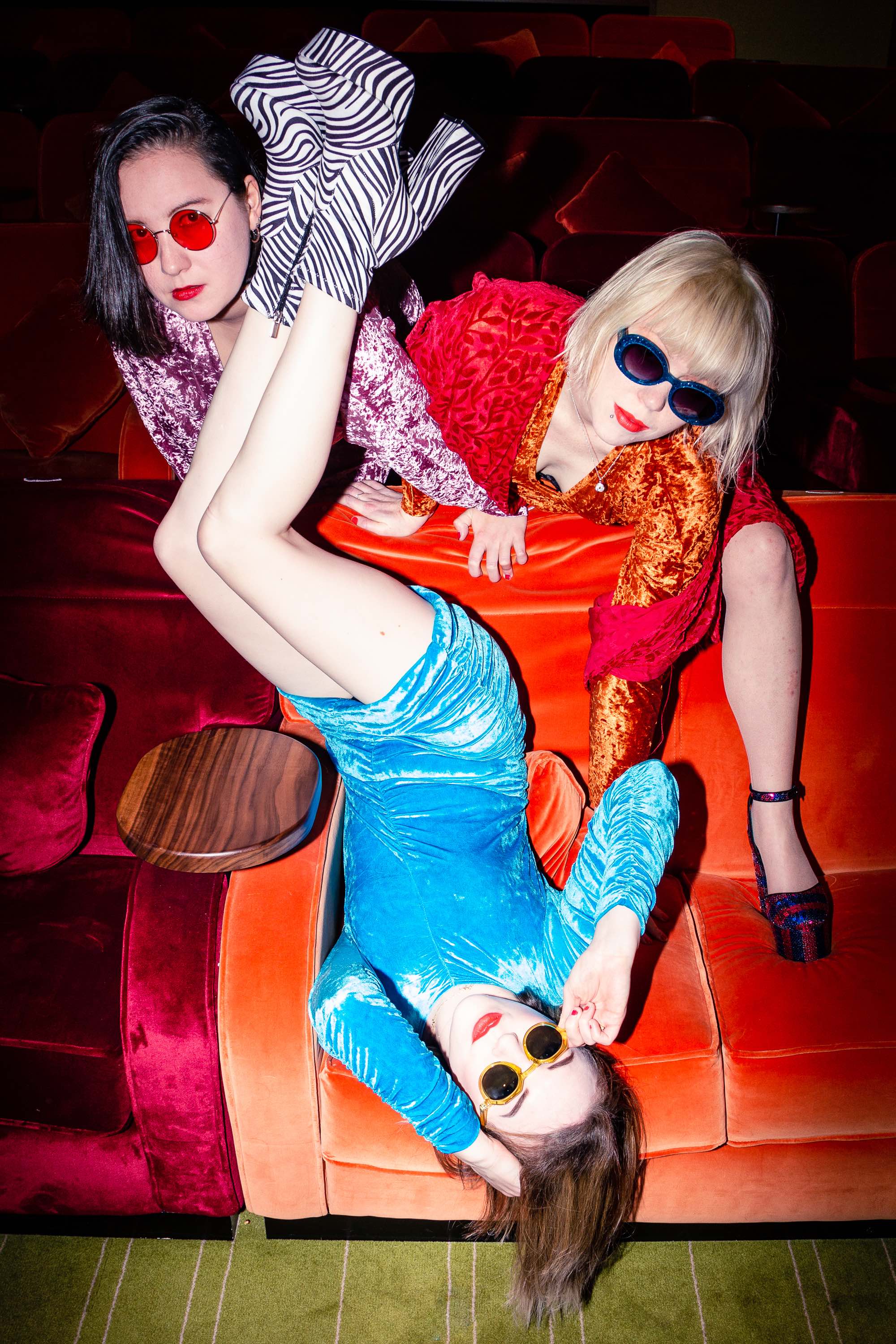