John Mayall was born on the 29th of November 1933 and grew up in a village not too far from Manchester, England.

It was here as a teenager that he first became attracted to the jazz and blues 78s in his father's record collection. Initially it was all about guitarists such as Eddie Lang, Lonnie Johnson, Brownie McGhee, Josh White and Leadbelly. However once he heard the sounds of boogie woogie giants Albert Ammons, Pete Johnson and Meade Lux Lewis, his desire to play was all he could think of. At the age of 14 when he went to Manchester's Junior School of Art, he had access to a piano for the first time and he began to learn the basics of this exciting music. He also found time to continue learning the guitar and a couple of years later, the harmonica, inspired by Sonny Terry, Sonny Boy Williamson and Little Walter.

After his two years at art school, he joined the art department of a major department store while starting to build up his own record collection that was to be his source of inspiration to play the blues. At age eighteen when he was due for National Service he spent three years in the Royal Engineers as an office clerk in the south of England and in Korea all the time playing whenever he got a chance. As no-one seemed to be interested in this type of music, John felt pretty much of an outsider throughout his twenties until 1962 when the news broke in the Melody Maker that Alexis Korner and Cyril Davies had opened a club in Ealing devoted to blues music. After Britain's ten year traditional jazz boom had about run its course, a new generation was ready for something new. Out came the amplifiers, guitars and harmonicas and out came young enthusiasts from all over the country eager to sit in and form their own groups.

This was all the encouragement thirty-year old John needed and, giving up his graphic design job, he moved from Manchester to London and began putting musicians together under the banner of The Bluesbreakers. Although things were rough at first, the music quickly took off thanks to the popularity of the Rolling Stones, Georgie Fame, Manfred Mann, The Animals and Spencer Davis with a young Steve Winwood. John also backed blues greats John Lee Hooker, T-Bone Walker, and Sonny Boy Williamson on their first English club tours.

After a couple of years and many personnel changes, Eric Clapton quit the Yardbirds and John quickly offered him the job as his new guitarist. Although John had previously released a couple of singles and a live LP for Decca, the now classic collaboration between Eric and John resulted in the all time best selling classic 'John Mayall's Bluesbreakers featuring Eric Clapton'. However by the time it was entering the charts, he and bassist Jack Bruce had left to form Cream. So began a succession of future stars who would define their roots under John's leadership before leaving to form their own groups. Peter Green, John McVie and Mick Fleetwood became Fleetwood Mac. Andy Fraser formed Free, and Mick Taylor joined the Rolling Stones.

In 1969, with his popularity blossoming in the USA, John caused somewhat of a stir with the release of a drummer less acoustic live album entitled "The Turning Point", from which his song "Room To Move" was destined to become a rock classic. He received a gold record for this album. Attracted by the West Coast climate and culture, John then made his permanent move from England to Laurel Canyon in Los Angeles and began forming bands with American musicians. Throughout the 70's, John became further revered for his many jazz/rock/blues innovations featuring such notable performers as Blue Mitchell, Red Holloway, Larry Taylor, and Harvey Mandel.

In 1982, motivated by nostalgia and fond memories, John decided to re-form the original Bluesbreakers. Mick Fleetwood was unavailable at the time so John hired drummer Colin Allen to join with John McVie and Mick Taylor for a couple of tours and a video concert film entitled 'Blues Alive'. Featured greats were Albert King, Buddy Guy, Junior Wells and Etta James. By the time Mick and John had returned to their respective careers, public reaction had convinced Mayall that he should honor his driving blues roots. In Los Angeles, he selected his choices for a new incarnation of the Bluesbreakers. Officially launched in 1984, it included future stars in their own right, guitarists Coco Montoya and Walter Trout.

Throughout the eighties and nineties, John's popularity went from strength to strength with a succession of dynamic albums such as 'Behind The Iron Curtain', 'Chicago Line', 'A Sense of Place', and the Grammy-nominated 'Wake Up Call' that featured guest artists Buddy Guy, Mavis Staples, Albert Collins and Mick Taylor.

In 1993, Texas guitarist Buddy Whittington joined the Bluesbreakers and for the next ten years energized the band with his unique and fiery ideas. Making his recording debut on Mayall's 'Spinning Coin' album, he proved to be more than equal to following in the footsteps of his illustrious predecessors. Other modern classics followed. 'Blues For the Lost Days' and 'Padlock On The Blues', (the latter co-produced by John and his wife Maggie, featured a rare collaboration with his close friend John Lee Hooker. On "Along For The Ride", Mayall re-teamed with a number of his former mates, including Peter Green, Mick Taylor, Mick Fleetwood and John McVie, as well as ZZ Top's Billy Gibbons, Steve Miller, Billy Preston, Steve Cropper, Otis Rush, Gary Moore and Jeff Healey. The younger generation was well represented by teenage guitar sensations Shannon Curfman and Jonny Lang. In 2002 'Stories' debuted the Billboard blues charts at #1.

At a 70th Birthday celebration in aid of UNICEF in Liverpool, a concert was filmed, recorded and released as a DVD and double CD in December 2003. Along with the Bluesbreakers, it featured old friends Eric Clapton, Mick Taylor and Chris Barber. The BBC also aired an hour-long documentary on John's life and career entitled 'The Godfather of British Blues' and to coincide with the release of 'Road Dogs' in 2005, John was awarded an OBE by The Queen's Honours list. In the Spring of 2007, John Mayall's 56th album release,'In The Palace Of The King," was an entire studio album that honored and paid tribute to the music of Mayall's long-time hero of the blues, Freddie King. All garnered great reviews, critical and popular acclaim and represent Mayall's ongoing mastery of the blues and his continuing importance in contemporary music.

In addition, over the last ten years, Mayall released live recordings on his own online label, Private Stash Records. (Some still available from his website johnmayall.com. They included 'Time Capsule' (containing historic 1957-62 live tapes), 'UK Tour 2K', (from a 2000 British tour), 'Boogie Woogie Man', (a selection of solo performances), 'Cookin' Down Under', (a live DVD from Australia) and 'No Days Off', (another British live show).

By October 2008, the years of heavy touring were beginning to take their toll on John and he reluctantly announced his decision to take an indefinite break and permanently retire the name 'Bluesbreakers'. It was a sad occasion to say farewell to Buddy and the guys after twenty years of great music and camaraderie but things had reached another turning point. This caused quite a stir in blues circles and lead to rumors about total retirement. Happily for the fans, early in 2009 Eagle Records called upon John to come up with a new album. Feeling much revived after months away from music, he put together a new band for the project.

A few years ago Buddy Whittington had introduced John to a fellow Texan guitarist Rocky Athas and he recalled how impressed he'd been at the time. Luckily he answered the call and was eager to come on board for the proposed album. With the need for a rhythm section of dynamic strength, John turned to bassist Greg Rzab who recommended his fellow Chicagoan Jay Davenport on drums. Finally the three guys were put together with keyboardist Tom Canning and within two days of meeting up in Los Angeles, the album 'Tough' was in the can. It had taken all of three days in the studio and, ever since it's release and a growing schedule of world tours, a new era was born. Although Tom toured with John and the guys for the first year, eventually his other priorities conflicted and he quit.

Since then, as a four piece, the dynamics have escalated to a high degree and in November 2010 a live show in London was recorded and is currently available from John's website on DVD and double CD formats. Today, John can safely say he's never been happier with his band and long career. Revived and revitalized, the long road continues. 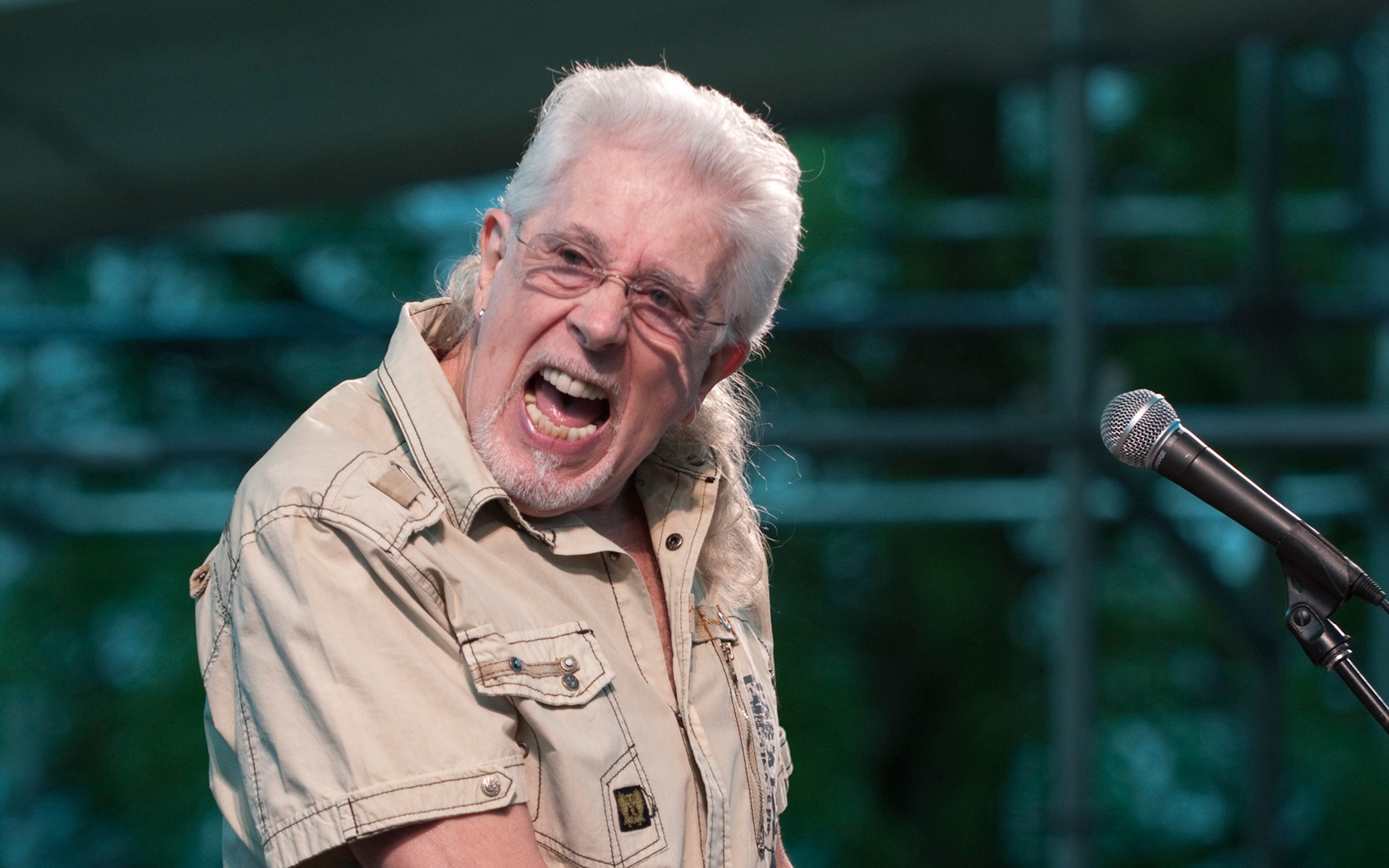