Enter a world where every sound is more than just an orchestrated coincidence. A place where chords are sparsely strung amidst meandering dreamscapes, and programmed drums and effects flirt with the melancholy of live musicians. Indulge in a panorama of uninhibited musical freedom, a murky depth of crystalline thoughts and muddled expressions. Embark to a realm where the journey is vastly more fulfilling than the destination, and once you arrive, you want nothing more than to turn back and rediscover every nuance of the voyage that got you there... Submit to Team Sleep.

What started as a couple of friends trading tapes in 1994 has since turned into a full-fledged band in 2005. With their self-titled debut album set for release on May 10 2005, through Maverick Recordings, TEAM SLEEP are prepared to finally unleash their project to the anticipation of both fans and critics alike.

The artistic evolution of guitarist Todd Wilkinson and Deftones frontman Chino Moreno, Team Sleep began as little more than an open-ended exercise in musical possibility between two friends. It was just fun, they didn't think anything of it. It was as natural as hanging out, watching a game and putting down some party bets, going to the movies or a summer barbeque. It didn't even cost much. “We paid like $30 each and bought a four-track together—I think it was stolen,” recalls Moreno. “We'd each have it for a couple of weeks, and we'd make tapes and exchange them.” The process started in 1994, a year before the Deftones released their first album, Adrenaline. A few tapes later, another friend was added to the mix, Crook, who began contributing turntables and programmed drums to the tiered guitars. As Moreno started adding the occasional vocal to the mix, the rough mixes began to transform into songs

“We were never going to make a record, or start a band,” adds Wilkinson, “I was just sitting at home, playing guitar, and I started recording some stuff. It was never about trying to play shows, record in a studio, or anything of that sort. It was just bumming around. I had never been in a band, and I never wanted to be—we were just friends.”

While five years may seem like a long time before an eventual debut album, the band has definitely been keeping active in between releasing Deftones albums and working on other projects. It wasn't until the year 2000 that an album was even discussed. And it took even a year longer than that for the name Team Sleep to come to fruition. In May 2001, the trio went to Seattle to record with Terry Date, and left with 12 instrumental tracks—With the exception of one track (and an additional interlude) featuring Deftones drummer Abe Cunningham, any drums were programmed by Crook. A month later, Wilkinson and Hella drummer Zach Hill began recording demos together, adding another component to the trio's expanding scope. In September of that same year, three more songs were recorded, this time with vocals by Helium frontwoman

In late 2001, TEAM SLEEP embarked on an 11-date tour up and down the west coast. The original release, which was set to drop in 2001, was pushed back after unfinished tracks from the record were leaked to the internet and Power 106 in Los Angeles immediately began to play Mercedes on the radio. Although this was a slight set back, the band continued to write together, eventually developing new original material. 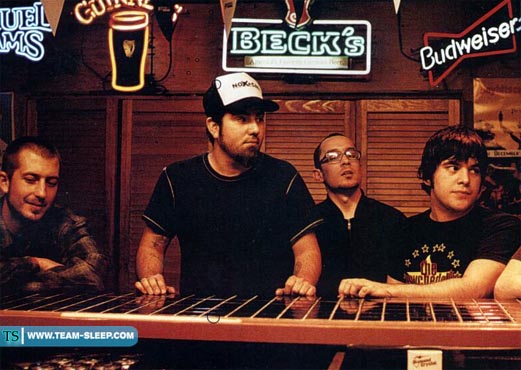